Dedicated to the electric sector, this company of 45 employees aims to expand and ramp up production to export not only to South America but the United States and Canada.

G&W Electric Mexico is the local offshoot of the US electricity company dedicated to the production of medium-voltage power distribution equipment involving disconnectors and switches and its plans for 2025 include the production of accessories at the San Luis Potosi plant for equipment used in the United States and Canada. Pedro Hector Alonso Hernandez, plant manager at G&W Electric, 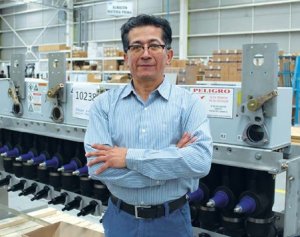 said the firm was set up in San Luis Potosi 14 years ago, in June 2008, and noted that while the electric sector does not have many applications, its work is vitally important since electricity is used across all industries. G&W Electric has two production lines: disconnectors and switches, with the former split into solid state and SF6 gas lines. “SF6 gas is used to insulate the electrical part of the product so the equipment can be used. The solid state line involves more modern equipment, where the insulating part is the solid part,” Mr Hernandez said.

In relation to the technologies used in its processes, the most interesting ones, he said, are the overvoltage tests, in this case Hi-Pot (High Potential Test for the Evaluation of Coils in Rotating Electric Machines), used regularly to guarantee the minimum dielectric strength of an insulation system, and Phoenix Contact, or injections of current and sophisticated measuring equipment for the electrical area.

All the products are fully customized to deliver on the standards and specifications of electricity companies, such as the CFE in the case of Mexico. Its main suppliers include companies in the steel and copper industry whose products are used in the structure of the equipment. Most are 100% local companies, along with national suppliers such as Schweitzer Engineering Laboratories and Hitachi ABB, which provide the control equipment for equipment. Many of the vendors for the electronic device technology are based out of the US and Canada. Pedro Hector Alonso Hernandez, plant manager at G&W Electric G&W Electric currently produces for its main customers including the Federal Electricity Commission (CFE) in Mexico; the Grupo ICE National Power and Light Company in South America; Electroval Telecomunicaciones y Energía in Costa Rica; and Grupo Enel for northern Colombia, Argentina, Chile, and Peru, where it exports its equipment. Mr Hernandez said the company chose San Luis Potosi because it is a strategic center due to its geographic location in the center of Mexico, connecting with the three most important cities in the country: Mexico City, Guadalajara, and Monterrey, as well as the connection with the port of Tampico to export to South America and with the Pacific to export to the south of the Americas. Another reason was because of the investment the federal government has plowed into the three cities via the CFE.

Core Challenges
Challenges the company has faced in San Luis Potosi in recent years include problems around raw material supply, due to worldwide situations such as Covid-19 and the war between Ukraine and Russia, which has shrunk supply for the electricity industry and other businesses. Mr Hernandez said these issues have also impacted the production area as there is not enough raw material for suppliers to meet established times, generating a delay in deliveries. “We used to have equipment delivery times of eight to 10 weeks and have now raised them from 20 to 22 weeks due to global sourcing issues. We are the ones who have to adapt to the logistics program, whereas before it was the logistics program that pivoted to our production schedule.

The tables have turned and we now work  in accordance with when the material arrives. We work day-to-day instead of planning as we did before 2020, when we had plans of six to 12 months.  Today we have daily surprises we have to adapt to,” he said. Despite this, G&W Electric has sought alternatives to continue its production and remain a leader in the electric industry, such as building up its distributor network and securing long-term procurement, despite the cost rises that products are experiencing, as inflation has been another blow to industries across Mexico.  “A critical factor right now is the inflation we have had since last year, translating into 10 to 15% more than we originally sold a product for, brought about by Covid and compounded by the war,” he said. Despite these setbacks, the plant continues to boast a high production volume, with sales of over MXN 300 million (roughly USD15 million) per year, and is upholding its main logistics relations with customs. Certifications include ISO 14000, ISO 45000, and ISO 9000:2015, as well as all the certifications required by the CFE in Mexico. G&W Electric currently has 45 people on staff in San Luis Potosi and it is the company’s only plant in Mexico. The goal is to leverage expansion to export to plants in the United States and Canada by 2025. 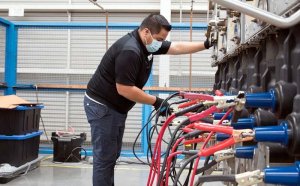 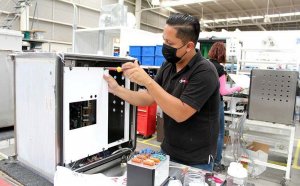